Current Topic:  The Age of Exploration 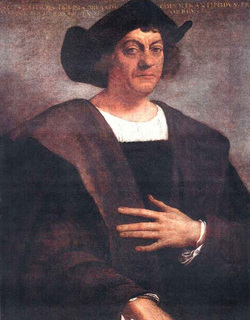 Christopher Columbus
Read pages 130-135, look closely at the map on page 132 and be able to explain its significance .   Also, reread/study the timeline handout and the matching activity and use your notes from class.

﻿
📺Click here to watch a video about Christopher Columbus

Christopher Columbus (1451-1506) was an Italian explorer who sailed across the Atlantic Ocean in 1492, hoping to find a route to India (in order to trade for spices). He made a total of four trips to the Caribbean and South America during the years 1492-1504.


The First Trip:
Columbus sailed for King Ferdinand II and Queen Isabella of Spain. On his first trip, Columbus led an expedition with three ships, the Niña (captained by Vicente Yáñez Pinzon), the Pinta (owned and captained by Martin Alonzo Pinzon), and the Santa Maria (captained by Columbus), and about 90 crew members. They set sail on Aug. 3, 1492 from Palos, Spain, and on October 11, 1492, spotted the Caribbean islands off southeastern North America. They landed on an island they called Guanahani, but Columbus later renamed it San Salvador. They were met by the local Taino Indians, many of whom were captured by Columbus' men and later sold into slavery. Columbus thought he had made it to Asia, and called this area the Indies, and called its inhabitants Indians.

While exploring the islands in the area and looking for gold to loot, Columbus' men traveled to the islands of Hispaniola (now divided into Haiti and the Dominican Republic), Cuba, and many other smaller islands. On the return trip, the Santa Maria was wrecked and the captain of the Pinta sailed off on his own to try to beat Columbus back. Columbus returned to Spain in the Nina, arriving on March 15, 1493.

The Second Trip:
On a second, larger expedition (Sept. 25, 1493-June 11, 1496), sailed with 17 ships and 1,200 to 1,500 men to find gold and capture Indians as slaves in the Indies. Columbus established a base in Hispaniola and sailed around Hispaniola and along the length of southern Cuba. He spotted and named the island of Dominica on November 3, 1493.

The Third Trip:
On a third expedition (May 30, 1498-October 1500), Columbus sailed farther south, to Trinidad and Venezuela (including the mouth of the Orinoco River). Columbus was the first European since the Viking Leif Ericsson to set foot on the mainland of America.
﻿

The contents of this webpage are intended to be used for the enhancement of instruction.  Once you leave the Laraway CCSD 70c website, and the district server, we assume no responsibility for the content thereafter.
Resource, do not remove