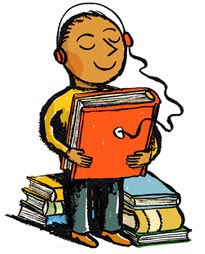 ﻿
﻿Here are some audio books you may enjoy listening to.  Reading is great, but sometimes listening is nice too.﻿

These are full length books, not condensed books.  When you listen, be sure to make a note of the chapter to begin with the next time you listen.﻿﻿
Anne of Green Gables
Lucy Maud Montgomery’s classic children’s novel, Anne of Green Gables tells the story of a red headed orphan girl with a personality you can’t help but love. Despite her “tragical” past, Anne’s optimism and imagination have helped her to always see the best in things. Anne’s life changes considerably when she is accidentally adopted by the Cuthberts, a brother and sister who thought they were getting a boy to help out on the farm. The Cuthberts decide Anne will have to be sent back to the orphange but before they know it, she has begun to work her way into their hearts.

Poems Every Child Should Know
This anthology of poetry, published in 1904, contains such favorites as The Raven, My Shadow, and The Village Blacksmith, as well as many lovely poems that may be unfamiliar. Most of the poems in this collection are short enough for children to memorize.

The Secret Garden
When Mary Lennox, who has been brought up in India in a spoiled manner, is orphaned she has to move to Yorkshire, England, to live with her uncle in Misselthwaite Manor. Here she is treated much differently than she was in India - she is able to make friends with children her own age, one of these being her sickly cousin, Colin Craven.

The Wind in the Willows
Kenneth Grahame wrote a classic children’s tale in 1908 - he penned The Wind in the Willows. He wrote of the English countryside and the beauty of it, but more than that, he showed how even the most commonplace can be extraordinary and rare. Wind in the Willows is a tale of friendship, of adventure, of foolishness and wisdom, of travel and change as well as peace and predictability; but most of all, it is a story of friendship - friendship that crosses species, ages, and professions. We all could do far worse than remember in this changing world that what changes least is that which is most true. (Summary by Arthur Piantadosi)

Black Beauty
Black Beauty is a fictional autobiographical memoir told by a horse, who recounts many tales, both of cruelty and kindness. The title page of the first edition states that it was “Translated from the Original Equine by Anna Sewell.” It was composed in the last years of her life, during which she was confined to her house as an invalid. After its publication in 1877, Sewell lived just long enough to see her first and only novel become an immediate bestseller, as well as it encouraging the better treatment of many cruelly-treated animals.
Although initially intended for people who work with horses, it soon became a children’s classic. While outwardly teaching animal welfare, it also contains allegorical lessons about how to treat people with kindness, sympathy and respect. The story is narrated in the first person and each short chapter relates an incident in Black Beauty’s life, with Sewell’s detailed observations and extensive descriptions of horse behaviour lending the novel a good deal of verisimilitude.
Summary adapted from Wikipedia by Cori Samuel, with help.

The Voyages of Dr. Doolittle
Doctor John Dolittle is the central character of a series of children’s books by Hugh Lofting. He is a doctor who shuns human patients in favour of animals, with whom he can speak in their own languages. He later becomes a naturalist, using his abilities to speak with animals to better understand nature and the history of the world.

Treasure Island
A mysterious map, pirates, and pieces of eight!  When young Jim Hawkins finds a map to pirates’ gold he starts on an adventure that takes him from his English village to a desert island with the murderous Black Dog, half-mad Ben Gunn, and (of course) Long John Silver.

Heidi
Hear Heidi if you’ve ever longed to see the Swiss mountain slopes. This story transports the listener from the fine air and freedom of the mountaintop to the confines of Frankfurt, back to the peaks again, bounding in flowered fields with goats at your heels and sky utterly surrounding you.
We meet Heidi when she is 5, led up the mountain by her aunt who has raised the orphan but must leave now for a position in Frankfurt. In a mountain cottage overlooking the valley is Heidi’s grandfather, and there with him the girl’s sweet, free nature expands with the vista. The author’s voice is straightforward, and so is our reader’s, with the child’s wonder, devotion, and sometimes humorous good intentions. When Heidi is taken from the mountains and nearly doesn’t make it back again, the most humorous as well as most heart-wringing scenes occur. All she learns during her absence from the mountain she brings back as seeds that will grow to benefit everyone around her. (Summary by Anita)